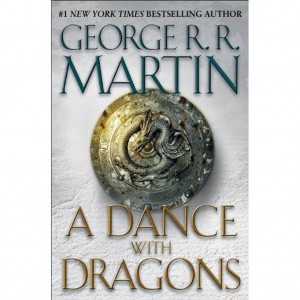 The fifth volume of George R.R. Martin’s A Song of Ice and Fire is the continuation of his epic fantasy but you won’t notice it tale of Westeros’ Seven Kingdoms and their counterpart, The Free Cities.  Inhabited by murderous siblings, the undead, spies, skinchangers and dragons, Martin’s people and lands deliver a story of betrayal and struggle that does not disappoint.  In the tradition of the first four novels, A Dance with Dragons twists and turns in ways the reader won’t see coming, and doesn’t necessarily want to.

The good ones die and the bad ones win in this world of war, leaving hero and anti-hero intertwined as Martin keeps every character’s head hovering above the proverbial chopping block.  Tyrion’s sense of humor and morbidity far outsize his stature as the bitter dwarf spends the bulk of his story simply trying to survive.  The pompous Queen Cersei is thrown in disgrace from her tower in King’s Landing, mischievous Arya Stark reappears blind in the free city of Braavos, and prince Quentyn Martell chases after his slave freeing, dragon wielding child queen Daenerys Targaryan in Meereen.  While ruling the Night’s Watch, 998th Lord Commander Jon Snow is forced to make difficult decisions about handling the always troublesome Wildlings on the other side of his wall as winter continues on its headlong collision course with the Seven Kingdoms of Westeros.  Religious tension grows around each participant playing the game of thrones as priests and priestesses from each of Martin’s faiths fight for power and the blessing of their own gods.

Told from a myriad of viewpoints, the sheer number of characters can at times become overwhelming, and ensures good use of the who’s who, Houses Great and Small, appendix.  This entry into A Song of Ice and Fire starts to bring the bloody autumn in Westeros to a close and finds characters crossing paths in a crescendo towards book six, The Winds of Winter.  The driving forces behind A Dance with Dragons, Westeros’ impending winter and the struggle of many characters to reach Queen Daenerys in Meereen, could do without some of the points of view.  A bit more time spent with Kevan Lannister in King’s Landing would have been welcome and with the surprise reappearance of the spider Varys in the final pages, I wonder what I missed while watching Tyrion traverse oceans and following Theon Greyjoy as he is beaten across Westeros.

Though lengthy at 958 pages and bulky in the hardcover edition, the quality of Martin’s literature is undeniable and his prowess as a wordsmith mirrors that of Daario Naharis’ sword play.  In creating a world of incredible depth, characters to match and a world where sometimes up is down and down is up, Martin has hidden a fantasy land in the cover of a novel about kings and pawns.  Not a light read, I’d pick something else for the beach, but a rainy day calls for just what Martin has written.  Each of tome of the series is excellently crafted in Martin’s distinct hand and A Dance with Dragons is just as good the first four.  I’ll eagerly await delivery of The Winds of Winter and look forward to seeing what HBO does for the next season of its Game of Thrones franchise.

3 thoughts on “A Dance with Dragons”