This weekend, Doug and I did something we rarely do:  go to the movie theater.  We say we’ll go all the time, but for some reason or another, it never ends up happening.  We stuck to our guns this time, though, and managed to rally for something important.  Lone Survivor.  I knew I was in for a gut wrenching, tear-drop inducing two hour feature that would make no apologies for its portrayal of a hard and painful reality, and that’s exactly what I got.

Based on Marcus Luttrell‘s novel of the same name, the film follows the journey of four 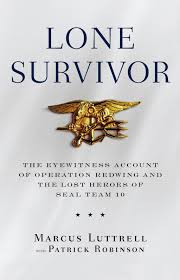 Navy SEALs who are dispatched to rid the world of an evil man.  I expected violence, I expected explosions and as I settled in with my cheat-tastic salty, buttery popcorn and large Sprite, I was ready.

The film introduces its audience to the always tight-knit SEAL community by showing a glimpse of the hardest physical and mental training a person can endure.  The bonds between the men who fill and support teams, as the film goes on to show, are quite possibly the most powerful around.  Your brothers might be the only lifeline you end up having and the camaraderie between members of the Spec Ops community runs deep.  Through scenes of everyday life to a mountainous battle ground, Peter Berg‘s film takes you with it into the hell of war with the world’s most elite fighters.  You’ve seen the men laughing, working for their futures and planning the mission, so by the time they’re under fire, you’re firmly attached to them.

It’s this attachment that makes you feel the pain of each bullet that hits its American target, the deafness that rings after a RPG lands feet from the men and sense the unbelievably hopeful spirit they each possess when the mission becomes compromised and an unfair gunfight of David and Goliath proportions begins.  The will to survive is never stronger than in the face of an enemy and as Matt Axelson states in the middle of this hellacious firefight, “You can die for your country, I’m gonna live for mine.”  Never giving up hope or breaking, these four valiant men put their bodies through torture while making decisions with life changing consequences.

Unfortunately, as the film’s title belies, not all of those who began Operation Red Wings make it home, Axelson among them.  A stirring film, well shot and beautifully developed, Lone Survivor’s most poignant moment surprisingly occurs after the movie’s last frame.  Photographs of each man who lost his life during the ill-fated mission are marched across the screen, showing mothers, fathers, wives, children and dogs that lost their sons, husbands and fathers and if that doesn’t bring make it a little harder to breathe, I don’t know what will.

I walked away from my seat full of popcorn, able to say nothing, wanting to Murph until I puked.  Lone Survivor is a serious reminder that the men of the United States Special Forces are the strongest, toughest and bravest in the world, and when politics get in the way of fighting an enemy without rules, bad things happen.  Every American owes them a debt that can never be repaid.

Have you seen Lone Survivor?  Did you enjoy it?