This weekend I checked off State #24 by finishing the Monumental Half Marathon.  With no idea how my run would go, I went out to have fun and check in on my fitness.  I arrived Thursday to hit the expo, explored the city Friday and was ready to go by Saturday morning.

Monumental Half Marathon race morning was crisp and clear if a little chilly at the start.  Since my hotel was only about a half mile from the Start/Finish area, I skipped gear check and lined up next to my corral after a one mile warm up.  I say ‘next to my corral’ because I was.  They were extremely crowded and I couldn’t get inside the fence until the runners in front of me started moving forward.

That traffic continued for a little more than the first mile.  I was seeded in Corral B, 1:45 and under expected finish times but found that at 1:38 pace I was passing an awful lot of people very quickly.  Including walkers and joggers.  Hopefully there will be bigger divisions or more corrals to eliminate this in following years.  Several other runners and I spent time running on 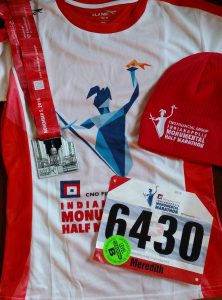 sidewalks until the roads opened up after the Mile 2 marker.

There was no timing mat at 5k (22:40) but I felt OK.  My pace had been all over the place due to the traffic and I still had no rhythm.  My legs and lungs felt good with a finally steady pace after a quick walk for water at Mile 7.  Shortly after that my calves starting getting grumpy.  I’ve been spending a lot of time working on stretching both them and my Achilles and I think the longer fibers aren’t strong enough to handle that much work for over 90 minutes yet.

With chatty calves I came through another water stop just past Mile 10 in about 1:15 and I set my goal to come in under 1:40.  I needed those two minutes of breathing room with less than 5k to go when I took a break to shake my calves out.  The last three miles I tried to slow my pace down.  Unfortunately, I was stuck in a move fast groove.  I took a final calf shake out walk at the Mile 11 mark.  An easy jog through that mile lead to a strong Mile 12.  I crossed the finish in 1:39.49/13.2 with very touchy calves.

I was happy with my race and to learn my fitness is still solid.  My walk was a bit ginger while picking up my medal, bottled water, chocolate milk, a new cap and lots of snacks.  The morning had turned out perfectly for my short cruise back to the hotel.  The Monumental Half Marathon was a great experience.  It’s a flat and fast course with good organization, course support and swag.

How many states have you run in?  What’s the next one?