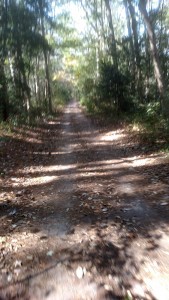 I didn’t run yesterday.  I wasn’t really feeling like it, had wiggle room in my training schedule and opted for a day of mountain bike cross training.  It was an absolutely gorgeous fall afternoon outside by the time I got around to working out so I chose to ride my bike up the Boardwalk to First Landing State Park’s Cape Henry Trail and back.

It was a blast.  I rode 16 miles on roads and dirt trails with pit stops at each of the trail’s fitness stations in both directions.  As soon as I entered the woods I started practicing taking pictures on the move.  This was my third try and isn’t bad for a first timer, right?  After ‘mastering’ that, a four mile warm up put me at the first of these mountain bike cross training stops, a stretching 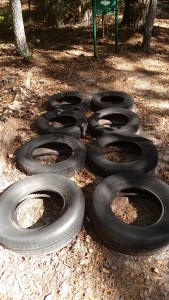 station.  I stretched my legs and shoulders then hopped back on my bike.

The next stations were all separated by about a quarter mile each which definitely helped increase the challenge.  My second stop was agility tires (5 times through) then it was step-ups for 2 minutes and push-ups (15).  These stops definitely got my heart pumping and it felt good to use the 90 second bike portions to take some deep breaths.

After that was the sprinter’s chair for 20 leg lifts each time I passed it.  Even though I had stretched, this exercise made it clear how tight my hamstrings still were from the previous day’s deadlifts.  My tight hamstrings got back on the bike to head for my next mountain bike cross training challenge: parallel bars.  I’m not amazing at dips and expected to struggle with traversing this obstacle.  It was nice to fight through and have some unexpected success, especially the second time through.  I’ve been working on getting my push-up numbers higher and think that 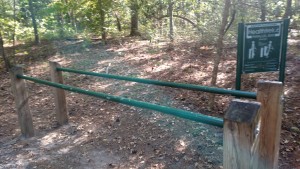 played a part in powering over this tough one.

While I’ve also been practicing getting my strict pull-up number to increase, the overhead ladder was not a good one for me and I skipped it on the return route.  My sweaty hands lack the grip strength necessary to complete it but it also kills my left shoulder.  Not worth hurting myself over.  A little further along, I did rock 10 strict pull-ups (2×5) each way on these bars that were nice and slippery, riding away proud of myself. 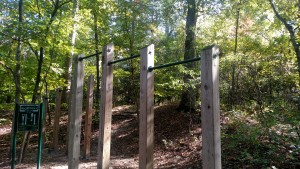 The final station heading out was crunches but I did 30 sit-ups each way.  They were harder than I thought after core work on the parallel bars and pull-ups!

I hit the trail head at Mile 8 then took a turn around the parking lot before heading back into the woods for my second round of fitness stations.  I had a great time doing this mountain bike cross training workout and using the park’s fitness stops for the first time.  This hour and a half workout will definitely stay in my ‘I don’t want to run today’ choice of workouts.

Do you bike for cross training?  Ever use fitness stations on trails or in parks?