After a much needed weekend off to shake off last week’s less than ideal long run, I began my ten week Myrtle Beach training with a solid round of workouts in Week One.  Monday and Tuesday are recapped here while Wednesday featured an eight miler with six at long run pace and the last two at half marathon pace.  Thursday was strength training with power clean and jerks to a new 1 rep max (yay!) and I rocked a great fifteen miler on Friday.  Yesterday was a light five and change mile run made up of two easy, two at 10k pace and a cool down to wrap up Myrtle Beach Week One.

Week Two features two tempo runs, two strength training days, one day of speed work and one fourteen miler but things heat up in Week Three.  Week Three of my Myrtle Beach Training includes the Rock n Roll Virginia Beach on 31 August.  I planned all along to use this as a long training run and because of that choice, I’m excited to announce I’ll be 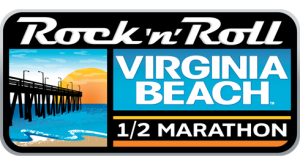 pacing the 2:15 group!  This will be a totally new experience for me.  The only other time I attempted to run with a pace group was my very first half marathon in Richmond, November 2012.

My goal was to finish under 2 hours with an elevated goal of breaking 1:55.00.  I found the 2 hour pace group at the Start and got ready to rock the race.  As soon as I crossed the line, something felt off.  I looked down at my watch when it beeped for the first mile and was shocked.  The 2 hour pace group had just clocked an 8:30!  I had been shooting to maintain a 9 minute pace so I forced myself to slow down and fall behind.  When the 2 hour group stopped for water a mile or two later, I passed them and never saw them again.  I ended up finishing in 1:54.04 then saw a lonely 2 hour pace sign cross minutes later.  Even though I was incredibly happy to have hit my sub 1:55 goal, I was disappointed and surprised the pace group had gone out so fast.  I felt for those who had counted on the pacers to keep them moving because we all know how going out too fast can ruin the final few miles of any race.

This is something I’ll be very aware of as my pacing buddy, our group and I cross the starting line to, hopefully, lead a few of our new friends to PRs at Rock n Roll Virginia Beach.  The pace for a 2:15 half is a hair slower than my easy recovery speed which makes me a little concerned I might try to pick it up.  I’m glad I’ll have my watch, a pacing pal and plenty of runners to help me keep it in check for my first pacing experience.  It’s going to be great to be exposed to a different side of racing and I hope I get to high-five lots of happy, successful runners at the Finish.

Have you ever led pace group?  Is it something you would like to try?  Will you be running with me?