It’s time for the July 2015 edition of Right Now!  This month I’ll tell you what I’m pacing this fall, what I’m harvesting this week and what I’ll be reading at the airport.  That’s right!  I’m on my way to  run the 2015 Rock n Roll Chicago Half Marathon where I’ll be hoping to finish a strong training run and stay cool on the course.

Pacing:  I’ll be pacing two half marathons this fall and couldn’t be more excited.  The first is one I had the honor of pacing last year, as well.  Rock n Roll Virginia Beach is coming September 6 and I’ll be out there with Hampton Runner leading the 2:15 group.  It’s always a hot one but at an easy pace, it’s a blast to cheer on so many runners to new PRs.  Hopefully there’s more music on the course this year!  My fall pacing duties continue with the Hartford Half Marathon 2 hour group on October 10 in Hartford, CT.  I’ll be checking off another state on my list while hopefully making some new friends and helping to set at least a few new PRs up north.

Harvesting:  I put my Miracle Gro AeroGarden together about four weeks ago and have started harvesting some of its produce.  I’m really excited to start cooking with the fresh, organic 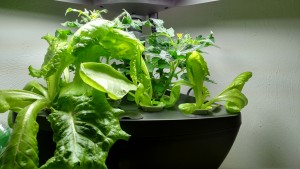 veggies and couldn’t be happier with the ease and speed they grew.  The few pieces of lettuce I’ve snuck have been very tasty and my tiny tomatoes look delicious.  With the bunnies outside, this indoor option has been perfect and low maintenance for me.

Reading: Lean In by Sheryl Sandberg.  This isn’t a new blockbuster best seller but I’ve finally gotten around to cracking it open.  It’s wonderful.  It is not only filled with solid, research backed facts about the monetary, emotional, support and expectation difference men and women face in the work place but offers suggestions to improve the situation without making a chance seem impossible.  A positive spin on a sometimes unfair and ultimately stressful circumstance, it’s a must read for anyone who wants to starting harvesting some serious success both inside and outside the home.

What are you harvesting, growing, reading or racing right now or soon?

It’s just past the middle of April and it’s time for the April edition of Right Now.  I’m two weeks away from my target spring race, the Prairie Fire Half Marathon in Wichita, Kansas which will help me check off state #11.  With only fourteen days until I go after a new half marathon PR, I’ve started my taper and have had some time to play.  Here’s what I’ve been watching, will be fixing and starting cooking this month. 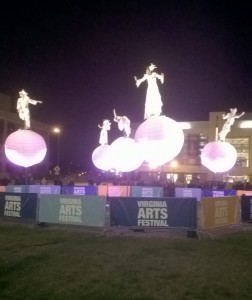 Watching.  Doug and I had a date night Wednesday to check out some of The Virginia Arts Festival that is going on right now in Norfolk.  After a casual dinner, we walked a few blocks to a grassy area for an outdoor show by Strange Fruit.  The Australian troop performed atop what essentially look like pole vaulting poles to a soundtrack that featured a variety of genres.  The weather was great and we really enjoyed watching the acrobats float through the air on their big white lanterns.

Fixing.  I’m not much of an artist but I can be pretty handy.  Working with a hammer and nails is something I can definitely do and painting isn’t much of a challenge, it tends to just be tedious.  Tape, paint, tape, tape, tape, paint.  Luckily, I won’t be painting any wall space that requires a roll of painter’s tape.  I will be sanding and staining this plant stand I recently acquired (thank you, taper miles) this weekend.  Once I’m finished, the philodendron I’m attempting to grow will have a proper home.

Cooking.  Omelettes, and I’m not sure what set me in this direction since breakfast for dinner isn’t usually my thing.  It really doesn’t matter why but I’m undeniably into omelettes right now.  Egg whites with shrimp, green pepper and cheddar cheese served as last night’s meal and I’m excited to play around with different fillings.

That’s what I have going on right now, what about you?

What’s in your favorite omelette?  Do you fix things around your home?

I bought plants.  I like flowers, plants and greenery just as much as the next girl, but with Doug’s allergies, anything that blooms was a no-no.  Being a girl who likes these things, however, doesn’t mean I know anything about them.  Luckily for me, I have 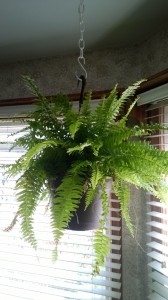 a friend with a Master’s Degree in Horticulture who was more than willing to help me out.  I gave her the criteria: non-blooming, not needy.  She asked about sunlight (all levels available) and recommended a few different green things.

Last week while my Mom was in town, I took the plunge.  We went to McDonald Garden Center and got all the necessary supplies.  Plants, pots, bases, potting soil, watering can.  We packed up the 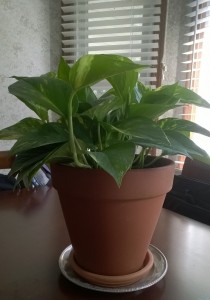 car and brought our procurements, one hanging Boston fern, one table top Philodendron and one big potted dwarf palm for the front entryway, home.

We re-potted, watered and fluffed each of the green guys outside on the deck and watched each one perk up as it sucked in the sun.  After each of the plants had absorbed its water, it was time to install them inside.  The fern hangs in 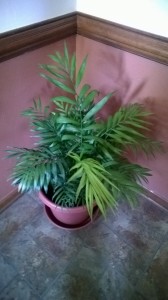 the kitchen, the Philodendron resides on the kitchen table and the dwarf palm took up residence in the front entryway.  Even though they lack to bright colors of pollen bearing flowering plants, these three do dress up the place a bit in all of their plain green glory.

I’m hoping these plants will help keep the house’s air a bit cleaner, and bring some sunshine inside with them.  I’m also hoping I can keep them alive.  I’m not much of a green thumb, mainly from a lack of trying, but I don’t have much faith in myself.  While not as challenging as a child or as difficult as a puppy, these plants might find a way to stick it to me.  I’ve put a reminder in my phone to water them regularly and that half of the battle is won.  It’s the pruning I might struggle with.  How much do I cut?  What’s too much?  When should I re-pot it in a bigger pot?

I’m sure the plants and I will be fine.  Jordy hasn’t tasted them and he doesn’t seem to have plans to bury any bones in the dwarf palm’s potting soil, so here we go!

Are you green thumb?  What plants do you have in your house?