Well, my first post injury race is in the can and it was definitely a learning experience.  Saturday’s Elizabeth River Run 10k far from one of my next runs but could have been worse.

Going into race morning I was concerned about how my glute would hold up.  It’s taken me a while to get warmed up lately and I didn’t want to run for 30 minutes before I ‘raced’.  I spent several workouts last week trying to determine the best way to get going as fast as possible and planned on a 2 mile warm up with two longer pick-ups and some hard strides.

That didn’t happen.  Race morning got hot.  Fast.  Because it was so warm and I actually felt pretty good, I cut the warm-up down to 1.5 miles.  I lined up and fought through some light traffic at the start.  Around Mile 2 I noticed the temperature had gone up about 15 degrees and there wasn’t much a breeze as we circled through the city.  There was at least a decent amount of shade in sections.  I walked leisurely through the water stops and took a breather at the 5k mark to rest my glute.  It had been a long time since I ran reasonably hard for three plus miles and didn’t want to irritate it. 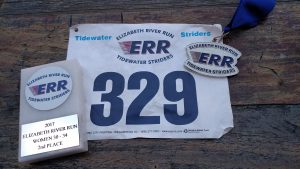 After that rest stop, my glute was doing well and the heat became more of an issue in the race’s second half.  When I was running I wasn’t too far off my warm weather 10k pace and it felt good.  Unfortunately the weather really got to me.  My heart rate was sky high and not enough water stops didn’t help me bring it down.  The stagnant air and humidity were no help either.  Coming into the last mile I wanted to pick things up a bit.

I increased my pace but had some discomfort in my right leg.  Not in the mood to re-injure myself, I slowed things back down.  I crossed the finish line in 48:12 feeling pretty good.  My biggest issue now is getting used to being uncomfortable again.  My glute seems to be 98% healed and my fear of straining it again is unreasonable.  I didn’t strain it running in the first place.  I’ve spent so much time playing it safe that I’m a bit of rut.  It’s time to get comfortable being uncomfortable again.

Have you run the Elizabeth River Run 10k?  How do you come back from injury?

Race recap on a Wednesday?  Yup!  The Tidewater Strider’s Memorial Scholarship 5k is held on the fourth Tuesday of July at 6:30pm.  It was in 2016 and has been each year in 1982.  Since this would be my second workout of the day there wasn’t any sort of goal.  I planned on having some fun and supporting a great organization while getting my legs moving again after a tough morning on the track.

The Memorial Scholarship 5k course runs through the gorgeous Norfolk Botanical Garden to complete the group’s Summer Series.  The series is a group run at the garden each Tuesday evening in July

featuring a poker run, a relay and a guess your finish outing.  On this year’s very hot and very humid evening over 200 people came out to run the annual event, including a bunch of my Team RWB buddies.  It was great to catch up with them as the sky clouded up (yay!) and it started to feel like rain.  Everyone was rooting for some to cool things off.  Unfortunately, we never got it.

On the bright side, I did get to warm up on some nicely shaded paths.  With five miles to rack up between a warm up, the race and a cool down I was happy to jog a bit extra before racing to enjoy the scenery.  The start lined up around 6:25 and we took off right on time.  Things were a bit crowded for the first half mile then loosened up nicely.  My legs were grumpy grumpy from a hard morning workout and the humidity didn’t help but I felt surprisingly good past Mile 1.  Not concerned about my time, I was running all of the curves wide to pick up as much mileage as possible to credit towards my five mile goal.

There were a few non-racers strolling through the beautiful gardens along with Pokemon Go hunters sharing the paths with us as the course wove through the park’s paved trails.  Two bridge crossing and one teeny tiny hill greeted us on the otherwise flat course and before I knew it I had passed the Mile 2 marker.  My legs were moving decently but lacked the power and turnover I had left on the track.  I took the final 1000M on cruise with plenty of running room, crossing the finish line in 22:32.  Not a great time for me but decent considering it was a second workout of the day on a hot and muggy one with my heavy shoes on.  I did win my Memorial Scholarship 5k age group!  Post race there were tons of raffles, pizzas, watermelons and beers.  I won zero raffles.  I did enjoy the food and drink while hanging out with a ton of run buddies to make up for it.

Racing in the evening was tough for me, especially after working out hard in the morning, but definitely effective.  It left me feeling positive about my training and made me realize I can push harder than I think I can.  I might even be figuring out how to race the 5k distance!

Have you ever raced in the evening?  Did you like it?